It is generally believed that the Gwandara speaking people came from Kano state – Nigeria and later settled in their today’s various locations. They migrated at about 1365 to escaped religious persecution or force conversion to Islam. So they left Kano under their leader whose father was a king and they first settled at Karshin-Daji (Fadan-Karshi) in the present day Kaduna state and subsequently Gwandara became their name. 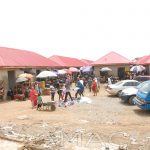 The present Gwandara speaking people of Gwagwa migrated from Gwagwa Keffi (Nasarawa state) during the reign of Sarki Ibrahim Maje Abuchi of Abuja, the then Suleja, which was led by Sarki INJI DA ALLAH who was the chief of Gwagwa right from Gwagwa Keffi at about 1880 before the arrival of the colonial masters rule (white men). On arrival, he met Ibrahim Maje Abuchi the then chief of Abuja (Suleja).

SARKI INJI DA ALLAH and his people were accepted and given a temporary site at Kantoma to settled down for a period of one year. After the elapsed of one year, INJI DA ALLAH requested for a permanent site to settled with his people and he was given the area of Gwazunu, but INJI DA ALLAH rejected the site and complained of a different place which is the present site of Gwagwa as his choice. With this chosen site, Sarki Maje Abuchi told him that he cannot be able to settle there because there are presence of individuals who are residing on the top of the mountain and they are of war-like people, but INJI DA ALLAH said he will make peace with them. Gwagwa people who were great warriors, hunters and farming as their main occupation; were given there to settled down, and later built there defensive wall.

After the death of Sarki Ibrahim Maje Abuchi, Sarki Mamman Gani became the next Chief of Abuja (Suleja) and he reigned for fifteen years, seven months, then came the reigned of Sarki Musa who spent twenty seven years, three months on the throne of Abuja before he died. After the death of Sarki  Musa, came in the Suleiman Barau, the son of Maman Gani who turbaned as the chief of Abuja.

Additionally, Gwagwa has defensive wall known as GANUWA GRA used by European colonial masters. Also it was Gwagwa that registration of tax and collection was made and later sent to Abuja (Suleja). Presently, Gwagwa has the population of over 100,000 people and other villages like Jiwa and its environs are currently settled on Gwagwa farmland – according to history narrated.