Once upon a time when we grow older, we’ll tell our Children that some years back, God in His infinite mercy raised a young man from “Grass and speedily to Grace”. 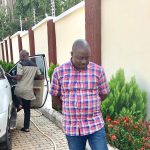 Citizens have grown increasingly frustrated with the system of government and eager to organize their own initiatives. Here comes Alh. Yakubu Saidu the founder of Y.S – Support Group – which is referred to as the rain makers of our time; contributing to the rise of the political, social, cultural and positive economical behaviors while leading to greater achievement in Abuja Municipal. This group has helped lead to the formation of good governance in Abuja Municipal Area Council. Y.S – Support Group also stimulate extensive experimentation with a host of non-governmental organizations offering services for self-expression.

Nevertheless, a business mogul and philanthropists (from the accent settlement of Karshi in Abuja) turned politician just like the Late Isa Funtua, MKO Abiola and many others of blessed memories. He came into political limelight from 2007 when he felt his immediate people needed his philanthropist and resources more directly or indirectly through government machineries and broke the jinx in AMAC politics by single-handedly sponsored the present government in AMAC (as confirmed by the holders of AMAC seat in different gathering to which we are all witnesses).

Before 2019 Elections, his Good wills and political tentacles has spread across all the Six area councils of FCT and of course the nation at large. And recently, not local neither state but National leadership of the ruling Party (APC) recognized his presence by nominating him as a member of APC campaign Council in the Forthcoming Ondo state governorship election in October who is chaired by the Lagos State governor

Y.S is now recognized nationally. Who says hard work doesn’t pay ? And who says people doesn’t watch what we do, especially in politics? My encounters with the PDP folks always saw them wish they had Y.S is in their party. This is their words: “we wish we have Y.S in our party, would’ve won all the seats in FCT including neighboring states” (smiles). A destiny child is indeed a survivor.

Y.S doesn’t need a local endorsement now even when politics remains local. It is now let for the locals to ensure his interest is highly protected. He therefore present himself to be of help come 2022!

Finally, the Y.S Support Group call on all the electorate and most importantly the delegates to disregard the campaign of calumny against the person of Y.S (tag as an outsider, not a party man and so on) and support him with your mandate to deliver his intent come 2022. If the national leadership of APC recognized him (Alh. Yakubu Saidu Tella – Karshi) then it’s a thing of achievement to GWANDARA nation.